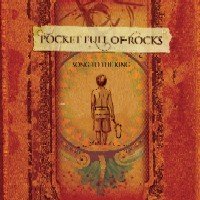 Pocket Full of Rocks is actually a name of a band (and I think it is a beautiful one – check the cover of their debut CD).

PFOR started as a small worship band in a local church 10 years ago. Even though this is their debut album, you would have heard their songs earlier – “Let the Worshippers Arise” and “Let It Rain” were written by the band.

I came across this group on KSBJ‘s Internet Radio and browsed to the band’s website. Heard a sample of all songs on the album – sounds impressive. Worship songs have to be from the heart and PFOR have theirs in the right place.

I liked what I read from their bio:
“Leading worship without a set list, where songs might be written on the spot, is the norm for Pocket Full of Rocks. “People ask us how we do the spontaneous thing. We have no idea really, but I think more than anything it’s just being available,” says Michael. Another important component is vulnerability. Pocket Full of Rocks sees the spontaneous songs as a continuation of prayer time – singing that vulnerable, unrehearsed time before God. “Imagine, being in front of 2,000 people, abandoning all form of rehearsal and making yourself vulnerable to God,” says Lee.”

The first song to be released from the album is “The Welcome Song“. I have a liking for songs that can be sung in church and PFOR’s songs come under that category. Thanks guys!

They even have a blog: http://pocketblog.pocketfullofrocks.com/

Hope this album comes soon to India. Love to get myself a copy.